Office Space for Rent in Arkansas 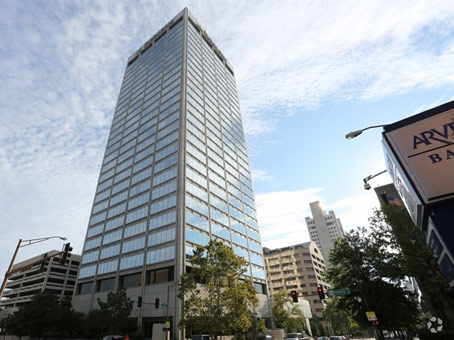 | Ref 21539 Experience professional, modern workspace at the Region’s Center business center in the heart of downtown Little Rock. Build your company’s presence in this premiere office tower among a diverse commu...

The state of Arkansas is located near the center of the Southern United States of America. The state’s capital and most populated city is Little Rock, and the state’s nickname is the ‘Natural State’. The geography in Arkansas includes the Ozark and the Ouachita Mountains, densely forested Arkansas Timberlands, and the lowlands of the Mississippi River and the Arkansas Delta. Culturally Arkansas is home to a great music heritage that includes Blues, bluegrass, folk, and country. There are many state parks with camping and hiking facilities.

Little Rock serves as the states transportation, business, culture, and government hub. The Fayetteville–Springdale–Rogers Metropolitan Area and Fort Smith metropolitan area in the north western corner of the state is an important education and economic center. There are four Fortune 500 Companies based in Arkansas. They include Wal-Mart (world’s top retailer), Tyson Foods, Murphy Oil, and Dillard’s (Department Store). There are many options for office space throughout the state.

There are many things to see and do in Arkansas. The Hot Springs National Park in Central Arkansas was created in 1832. It is the nation’s oldest and smallest national park. This park was created to protect 47 natural flowing thermal springs. The park offers a museum in the historic 1915 Fordyce Bathhouse with beautiful mosaic tile floors, marble, and stained glass windows and ceilings. There are self-guided tours and several movies (Valley of Vapors, Taking the Baths) that provide information on the area. There are still working bathhouses in the area, serving as spas. There is camping, hiking, and shopping in and around the park. Barbecue is King in Arkansas when it comes to food. The most popular choice is pork barbecue, but beef and chicken are also favourites. BBQ is available in upscale restaurants, roadside stands, and even local food trucks. It is often served with coleslaw, French fries, or hushpuppies (a ball of fried cornmeal batter). Other local favorites include fried catfish and traditional African-American ‘soul food’ (i.e. fried Chicken, black-eyed peas, sweet-potatoes, grits, and ‘greens’).

Little Rock National Airport is Arkansas’ main air terminal. Main roads such as Interstate 30 and Interstate 40 run through the area. Rail service is provided twice daily by Amtrak’s Texas Eaglewith to stations at Walnut Ridge, Little Rock, Malvern, Arkadelphia, Hope and Texarkana. This route crosses the state from north east to south west. Interstate 30 and 40 run all the way through Arkansas making the area very accessible.